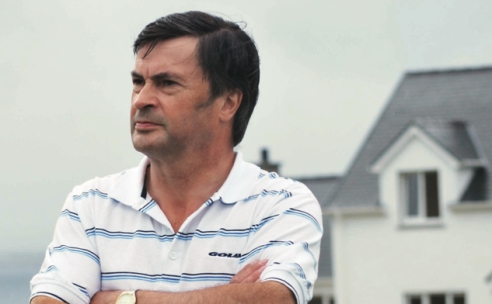 This piece was published in The Big Issue in July 2009.

As the ferry slinks out of Stornoway harbour – the first ever Sunday sailing – there are precious few hints of divine blessing or Almighty wrath.There are no rainbows, no thunderbolts and no sign of the engine trouble that flared up earlier in the week.

The Minch crossing to the mainland is unbiblically “moderate” (according to Caledonian MacBrayne’s chart) and the skies are keeping schtum, offering only a bland grey and a touch of light rain.We have left two distinct groups of Lewis islanders back at the pier: the ecstatic and the appalled.

The secular campaigners cheered wildly at the boat’s departing hoot, having fought long and hard for a service that opens them up to the world. The others – some of the Outer Hebrides staunchest churchmen, for whom the new link represents the last nail in the coffin of the Scottish Sabbath – huddled together in stern countenance and recite Psalm 46: ‘God is our Refuge and Strength’.

Onboard and unbowed, a bunch of rowdy folk musicians leaving Lewis after an annual music festival begins celebrating in the ferry bar. After a jaunty instrumental or two, there are some new numbers for the songbook – The Ballad of the Sunday Sailings and Stornoway Blues – featuring lines about “The ministers who tried to stop us”.

One of the older Sabbath-breakers at the back taps his feet and swigs a dram, happy as a clam at high water. “That’s us he’s singing aboot!” he beams. “He’s singing aboot whit happened to us today!”Legend has been forged: the passing of the Lord’s Day on Lewis, the last bastion of Presbyterian dominance. Some have characterised the affair as a battle for the very soul of the island, a corner of the country unique in its strict observance of an inactive Sunday.

It is not only the religiously inclined who are worried a Sunday connection might spoil precious breathing space from the mainland’s commercial existence. Tradition dictates buses don’t run, council services are shut and only one shop – a petrol station called Englebrets – gently breaks the silence to supply the hungover with bacon rolls and cans of Red Bull.

The long-running saga of the Sunday ferry took a decisive turn last week when CalMac bosses announced the running of a regular seven-day service after receiving legal advice they could be in breach of equality laws. CalMac’s operations director Phil Preston has no regrets. “The numbers cheering us off says a lot about how the public feel,” he says.

“You have to have some sympathy and sensitivity to the opposing argument, but the demand is clear. It’s not a commercial venture for us – it’s an essential service we’re providing.”

Organisers of the Lord’s Day Observance Society (LDOS) had been steeling themselves for a one-off Rev MacIver, above, sees the Sunday ferry as an erosion of spiritual values ferry used to deal with the influx of festivalgoers, and were left seething at the permanent change.

“It has humiliated Christians and broken hearts all over the island,” anti-ferry firebrand John MacLeod tells me.

The war of words seems to have become surprisingly nasty for a place where good manners are valued so highly. At one extreme, modernisers can been heard muttering about freedom from “fundamentalism” and the “Ayatollahs” of the island.

At the other, the retired minister Angus Smith, still known locally as the “Ferry Reverend” for laying down on the Kyleakin pier when the first Sabbath sailing came to Skye in 1965, has warned that the latest service will bring crime to Lewis and all the “things that terrified parents”.

I find he’s in no mood for further discussion. “Ach, it’s been talk, talk, talk,” he says. “I’m sick of it altogether.”

If you are unfamiliar with Gaeldom, it is tempting to clutch at whatever cultural frames of reference are at hand – Whisky Galore or Local Hero – but not so easy make them fit reality.

Out at Garrabost, on the north east of Lewis, past long stretches of peat field, the Free Church manse of Rev James MacIver can feel as remote as Craggy Island. But MacIver (pictured above), chatty and urbane, defies the stereotype of the dour Wee Free minister, and tries to assess the awkward row with something approaching good humour.

“It is a holy day, and it is important to observe the Lord’s Day in the way God has given us,” he says. “But it is important to put it in perspective. Perhaps we have presented the arguments as if we were completely obsessed with observing the Sabbath, as if it were the only thing. It is just one of the Ten Commandments. But it’s one that feeds into all the others, as part of the wider moral code.”

Now the immediate dispute is over, MacIver sees an opportunity to concentrate on the other ways in which the island is already suffering from “the gradual erosion of spiritual values for financial ones”.

The bedraggled state of Stornoway’s town centre on Friday and Saturday nights – not so far off Sauchiehall Street’s ugliest excesses – suggests bad habits have taken hold.

“We have the same social problems as elsewhere – alcohol and drug addiction, family breakup and housing difficulties for young people,” the minister notes. “The church has put a lot of energy into these things, and must continue to do so.”

At Western Isles Council HQ, a drab and eerily empty building only a few minutes walk from the pier, the local authority’s leader Angus Campbell leans back in his comfy chair, coming to terms with defeat. He, like 12 of the mostly independent 18 councillors, fought against the intrusion of a ferry that might disrupt the island’s delicate balance of work, rest and play.

“There is anger, of course, but no great bitterness between the councillors. The press likes to portray us as head-in-sand type people, but we can talk about these things like adults,” says Campbell.

Like many islanders, the councillor has more than one line of work. He owns one of the other petrol stations and is happy to keep it open only six days a week. “It keeps overheads down,” he explains.

“I have no strong religious views, but I certainly appreciate a Sunday off. In my mind, the uniqueness is part of the attraction – visitors appreciate the way of life here has a different pace.”

It might have taken place in one of the sleepier parts of Scotland, but the political ramifications of the CalMac stramash could be significant.

One of the most active pro-sailing councillors, Donald John MacSween, has announced plans to stand as Labour’s Westminster candidate at the next general election against Angus MacNeil, the Western Isles’ sitting SNP MP. MacNeil stands accused of fence-sitting on the ferry issue. “No one here likes someone trying to ride both horses,” as one Lewisman puts it. Even SNP councillor Phillip MacLean, another pro-sailing advocate, concedes MacNeil has been “strangely silent”.

He is careful not to crow, but MacSween believes the non-stances of MacNeil and his SNP colleague Alasdair Allan, the Western Isles MSP, were dreadful miscalculations. “They were conspicuous by their absence, and I think people were pretty appalled by that,” he says.

“I’ve always respected other peoples’ view, but a Sunday service for those who want to use it should make a positive difference to the economy of the island. The main thing is, people can travel to and from work and students can come home for the weekend.”

There are other consequences, large and small. The men puffing cigarettes outside the British Legion in Stornoway are delighted they’ll now be able to head down to the Rangers game and be back up on a Sunday night.

Uisdean MacLeod, a film and TV technician at Studio Alba who has spent most of spare time in recent years lobbying CalMac for a seven-day service alongside his partner Lesley, has the most pressing reason of all to celebrate.

His two-year-old son Rowan has cystic fibrosis and needs regular care at Raigmore Hospital in Inverness. “It’s just absolutely fantastic, we’ve been pushing for it for so long,” he sighs, as his lad tears around at his feet.

Lesley’s mother lives in Ullapool, so Rowan will now get to see his granny much more often. “It’s about freedom of movement,” he explains. “A lot of people who work on the oil rigs have moved their family off the island because they can be called up at short notice.

“We would have had to move off the island at some stage – that’s how important it was to us. It’s ludicrous that the same council should have allowed Sunday service to other islands but been against it on Lewis and Harris.

“It was an enforced Sunday observance, which was wrong and really belonged to another age. People should be allowed to do what they want to do. Some people go to church on a Sunday; some go to the beach; some go to the pub and get absolutely legless.”

MacLeod’s colleague Angus Mackay also works for the TV station on Lewis, but the pair have found themselves at loggerheads. Mackay has been equally active in managing the anti-ferry LDOS campaign. “We’ve learned not to talk about it,” chuckles Uisdean.

Mackay is not quite what you might expect from such a strident champion of the Sabbath. An easy-going and affable young man who fondly recalls his days working for STV in Glasgow, he concedes it is “a spiritual thing” for him personally, but argues from a more political perspective. He suspects freight deliveries on a Sunday will be next, which means that the docks and the warehouses will open seven days a week and then local Tesco and Co-op branches will then follow suit.

“The Sabbath is there to protect people,” he says. “It’s the original piece of labour legislation. The people who have to deal with the fall-out are those in the service sector – many of whom might be unhappy about working Sunday, but might have to now.”

He believes the demise of the special Sunday is something for all ages to mourn. “Some are beginning to question materialism, the relentless 24/7 culture, especially since the credit crunch. Unfortunately, this generation might not get a chance to experience a different way of life.”

Back on the infamous first Sunday ferry, an impromptu ceilidh is in full swing. The ageing white-haired reveller is enjoying his third or forth whisky. One of the musicians brings him yet another. “Och well, if you’re buying son…”

For all the untouched, other-worldly beauty of the Outer Hebrides, it’s difficult to say no to a bit more of life when it’s offered.