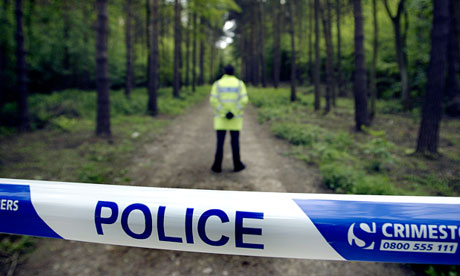 This piece was published in The Big Issue in August 2008.

Detective Sergeant Rob Millar sucks on a cigarette. He’s back on Vancouver Avenue, part of a sleepy pebble-dashed housing estate in Livingston, retracing the last-known steps of 88-year-old Mary Ferns. Until seven weeks ago, the old woman had enjoyed a quiet retirement here with husband Bill.

After breakfast on June 17, Mary washed up the dishes. At 9.30am she told Bill she was going out to buy a pair of tights. She put on her jacket, left the house and never came back.

No credible sightings place Mary anywhere beyond the houses just round the corner. Nothing belonging to her has been found. Nothing can be ruled in or out.

The case baffles Millar. He’s been with the force for nearly 30 years and has seen his fair share of strange things. But nothing quite like this.

“The thing that’s worrying me is there’s no evidence at all,” he says. “There’s just no trace of her. We literally haven’t left a single stone unturned. But nature’s just not offering anything up at the moment.”

Millar walks again through the labyrinth of concrete pathways, pointing out all the routes she might have taken to the shopping centre. Millar is forced to head back to the car none the wiser.

“I keep asking myself, “Where is she?” It’s the question I can’t get rid of.”

He mumbles it again as he starts the engine.

The seasoned coppers at the helm of the inquiry admit they are currently at a loss. They know Mary was in full control of her faculties, had no reason to disappear and was never prone to wandering off.

At Livingston Police HQ, a “serious incident room” has been set up to find her. The relatively small station might only have one case a year meriting this level of activity. Today, seven or eight people are here cross-checking records of all kinds, taking phone calls from the public and planning further leaflet drops.

“The sole purpose of this room and everyone in it is to find Mary,” says Millar. “We’re absolutely determined to get some answers.”

Marker pen sketches and maps of the estate around Vancouver Avenue are Blu-Tacked to the walls, pinpointing possible journeys and witnesses. CSI Miami it is not, but Lothian and Borders Police aren’t working with Hollywood budgets.

She could have crossed Howden East Road to the bus stop. It would be the easiest way to get to the huge Almondvale shopping complex with dominates the centre of the town. Yet a friend who sits most mornings at the bus stop didn’t see her that day. Mary could have caught one of the taxis which stop on Howden East Road, or she could have walked along an underpass that would eventually take her out at the shopping centre.

It seems unlikely, however, that the frail Mary Ferns, just 5ft 3” and dependant on her floral blue walking stick to get around, would manage the 25-minute walk.

Successive appeals to the public for information have led to more than 50 apparent sightings in the past six weeks, but nothing concrete. The owner of a white van, seen by multiple witnesses parked on Howden Road East on the morning of the disappearance, has not come forward.

Police don’t put much stock in a report from a shop worker in Edinburgh’s Rose Street who might have seen someone resembling Mrs Ferns walking by in the afternoon of the 17th. According to Alan Scott, the Livingston police officer handling the public information campaign, some of the sightings have been “time impossible”, placing her in Saltcoats and Glasgow early on the morning of the disappearance.

“What you do find with empathic cases like this, with elderly people and children, you get a lot of good-willed people phoning up, wanting to say they’ve seen her,” says Scott.

“Some then admit it probably wasn’t her, but you have to show good faith and check them all out. We’d rather take these calls than not. Somebody must have seen something.”

The proactive period immediately after her disappearance, the time DS Millar refers to as the “golden hour”, proved to be no more than crossing possibilities off a list.

Mr Ferns, who became more agitated as Tuesday afternoon wore on, phoned the police in the early evening to report his wife missing. After checking with family, friends, shops and local hospitals, patrol cars scanned the town and police officers began searching lock-ups and garages in the area.

As well as monitoring Mary’s bank and pension accounts, taking a sample of her hair from a brush to check DNA records and looking at CCTV footage, a period of intensive house calls began (the inquiry team reckon they’ve asked questions about Mary on around 1,000 doorsteps to date).

An exhaustive search of Livingston’s Howden woods at the end of the first week turned up nothing. “It’s after the first few days, after you’ve discounted the obvious, that the absence of any information becomes more mysterious,” concedes Scott.

“We have to stress this is still a missing persons inquiry. She can go out the door and not come back of her own volition, of course. But it would be very unusual for someone of her age to do a Reginald Perrin.”

On June 30, Mary Ferns became one of the long-term lost, indexed on the police’s National Missing Persons Bureau system as one of the five per cent of missing people not located, dead or alive, within 14 days.

The same day, June 30, divers from Central Scotland Police searched the River Almond. Nothing. The underwater unit believe, with a high degree of certainty, the river’s currents could not have carried a body out through the Firth of Forth.

Further checks – with taxi firms, lost property offices and hospitals across the country – have proved fruitless. With all the obvious avenues of information empty, DS Millar knows the likelihood of bringing Mary home safe and well is now diminishing by the day.

“We can’t rule out the idea that something sinister has happened to the poor woman,” he sighs. “There’s no one who wishes her to turn up dead, but you have to be realistic. The poor soul has been out there for seven weeks. I’d dearly love her to walk in the front door, but I don’t think it’s going to happen.”

This does not mean Millar will give up. Mary Ferns’s disappearance clearly bothers the detective, bothers him beyond the usual taxing duties of the job. He says he wants to be able to ring the door and let the family know, one way or another, what happened.

Stepdaughter Anne Foster arrives at police HQ to check-in with the team. She has come to know Millar, Scott and some of the other officers well and appreciates the strain they are under. “I know it’s become personal for these guys too.”

Nothing, however, compares, to the pain her father feels. Bill, now 83, found happiness with Mary late in life, after both were widowed. They have been married for 16 years, although they had known each other while working at the old Bangour Village Hospital.

“He’s become more and more worried,” says Anne. “It’s been very difficult for him. We don’t want to think something bad has necessarily happened to her, but we have to be very realistic. The mind goes… absolutely everywhere,” she says, choking back the tears. “It goes places you don’t want it to go.”

Anne, shifting between past and present tenses, describes her mother-in-law with genuine affection, as “a lovely person” with “quite a sense of humour”. Nieces and nephews visited regularly and all have come together to support Bill.

Despite her asthma, poor sight and slight deafness, Mary insisted on doing as much for herself as possible and took great pride in her appearance. “Dad would often drive her to the shops but she would occasionally go herself,” says Anne.

“She liked her independence, despite her years. She liked her hair tidy and clothes nice. I can’t imagine how she would have gone away without a change of clothes, which leads us to believe she didn’t disappear deliberately. She was still mentally very alert. She was…is…an incredibly determined person.”

As DS Millar drives Anne back to Vancouver Avenue to check on her father, he talks about finding “May”, just as the family does.

“I’ll be up front with you,” he says. “I’ve been doing this for 28 years and I’m completely baffled. Baffled. I like getting answers. If somebody breaks into a garage, I want to know who did it. This may still be a mystery at the moment but I believe that there’s always an answer.”

The need for closure, the need to find a beginning, middle and an end to each life, troubles the professionals as well as the families of the missing. An explanation is what everybody wants. The search for May goes on.