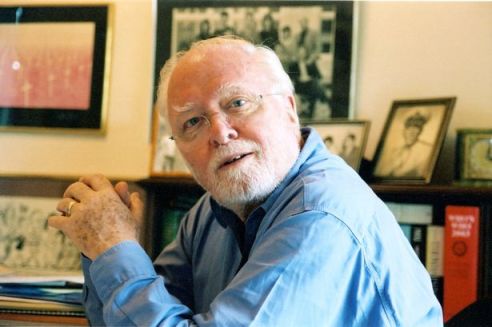 This piece was published in The Big Issue in December 2008.

Waiting for Richard Attenborough in his hotel’s dining room, I remind myself that he has not spent his entire life charming the world in the kindly, avuncular manner now expected of him. Sometimes, rather brilliantly, he pretended to be a complete bastard, excelling as a sociopathic gangster (Brighton Rock), a cold-eyed serial killer (10 Rilington Place) and a child-snatching oddball (Séance on a Wet Afternoon).

There is evidence of an obsessive determination as director. It must have required a rare, steely toughness to have completed Gandhi despite two decades of setbacks. And no-one can be quite as nice as all that, surely. Not all the time.

But it’s no use. The kindly, avuncular old soul has arrived: the Attenborough of Jurassic Park and Miracle on 34th Street, patting my hand and asking questions about where my parents grew up and ordering salmon sandwiches and lemonade with a kind word or two for the waiter. He does all this at a stately pace of course – at 85 things take a little longer – but he retains a boyish enthusiasm for everything in his orbit.

Lord Attenborough’s confidant of several decades Diana Hawkins is also here, the right-hand woman with whom he has penned a memoir, Entirely Up to You Darling. Attenborough refers to Hawkins as “the duchess” and blows a little kiss in her direction whenever he senses he is dominating the conversation.

The rapour is obvious as they open up a mammoth storehouse of memories. Not that they always agree on the details. Hawkins teases her mentor about crying during his acceptance speech when Gandhi won best picture at the 1982 Oscars.

“You did cry Dickie,” Hawkins insists.

“You lying bugger!” hoots his Lordship. “If you watch it, not a single tear runs down my face.”

However many tears were shed, plenty of blood and sweat went into the great mission of Attenborough’s professional life. The project started in 1962 with a plea from an Indian civil servant and involved a close friendship between Attenborough and Prime Minister Indira Gandhi, assassinated not long after the film’s completion.

Attenborough says the journey actually began a lot earlier, as a boy, while watching the newsreels with his father at a Sunday matinee. “I remember sitting next to Papa and this man Gandhi appeared on the screen. The audience tittered at this unfamiliar figure. He said to me: “Son, don’t pay any attention. This is one of the great men of our time.””

Such was the status of the political and spiritual leader many decades later, playing him on screen would confer a greatness of its own. Before the unknown Ben Kingsley presented himself, John Hurt and Anthony Hopkins were considered. The great Welsh actor went as far as checking into a health farm to shed considerable weight for the role.

“I can’t remember how many stone he lost, but it was a lot,” says Attenborough. “But he knew he wasn’t right for the part. A marvellous actor. Actually, I remember carrying Anthony onto the set (of Young Winston) because he was so pissed.”

Hawkins: “But after that film, he never touched another drop. If only he could have just a couple of drinks he’d be so much more relaxed, but he daren’t. He suffered from awful stage fright, didn’t he Dickie?”

Attenborough: “Oh, awful, awful. A lot of actors did. Robert Donat used to throw up before he went on, you know. He had a bucket on the side of the stage. It’s a draining business.”

His place in screen heaven may already be secure, but Attenborough was once on first-name terms with most of its inhabitants. Stories about Larry (Lawrence Olivier) and Johnny (John Mills) and Johnny G (John Gielgud) are delivered with an actor’s poise, but he relives each with earnest joy, as if past and present were one and the same.

Take the following tale about his idol Noel Coward. “Oh, I adored him. Of the all great people I’ve known, he perhaps had the greatest aura. He was giving me a doctorate once, and I had to go forward and bow before him, in all the regalia, in front of all the academics. As I bowed, he leaned and said to me: “My, you do look pretty dear boy.” Well, I was fucked, completely fucked – I couldn’t stop giggling.”

He laughs as if Noel C was still whispering wisecracks in his ear (and yes, Attenborough does say “fuck”).

Questions about his late sixties anti-war satire Oh What a Lovely War bring him to a new biography of Earl Douglas Haig and the Field Marshal’s dark indifference to how many millions of German and British lives were to be lost in the trenches, so long as there were slightly more German dead than British.

“That’s what he really thought,” croaks Attenborough, shaking his head, his reddened eyes now moist. “The Smith family in the film stood for every family, of course, because it was all of us who lost.”

However emotional his connection with the great epochs of history, Attenborough has come to know tragedy more directly. His daughter Lucy and granddaughter Jane were killed in the south-Asian tsunami of Boxing Day 2004, leaving him heartbroken, barely able to cope.

He says was unable to listen to music for a couple of years. “Too painful.”

When the first Christmas at home in London without them proved too difficult, he and his wife Shelia resolved to relocate family gatherings to their house on the Isle of Bute.

“Growing up, we always had a very formal Christmas with all the family,” he explains. “For dinner, we sat at a big table, and everyone had their place at the table. We kept the tradition going over the years. So it was very difficult to see the gaps where Jane and Lucy should be.”

Attenborough does not understand the concept of closure. “No, no – slowly and gradually I have been able to revisit the memories,” he says. “But it’s no good at pretending it’s going to get better because it doesn’t. You become better at dealing with it, that’s all. You place it in a box. Organised religion as such, has not satisfied me. I need additional faith. I believe in family. I find comfort in the love of my family.”

Lunch is at an end, and it is time for Attenborough to collect yet another honorary degree, this time from the Royal Scottish Academy of Music and Drama.

But even his warm goodbye involves stepping back to tell another story, one about being punched by a small boy during a charity function at Downing Street. “Bop – right on the chin he got me…”

The old man toddles off to receive more plaudits, tell his stories and meet new friends. His mind must be brimming with all those precious memories, but there’s always room to make a few more.