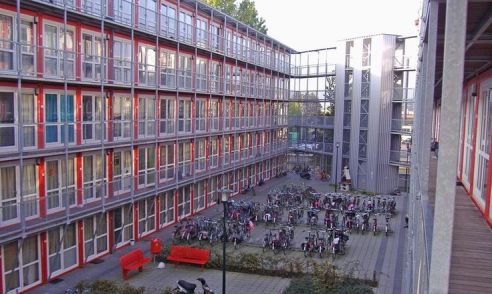 This piece appeared in The Guardian, October 2015.

It takes time to adjust to living inside a steel box. Timothy Ader did not, initially, like the idea of staying at Wenckehof, a student village in Amsterdam made up of 1,000 recycled shipping containers. But three years after moving in, he has no regrets.

“My first impression of the containers was, ‘It’s ghetto stuff – I’m not living there,’” recalls the 24-year-old. “But I started visiting a friend of mine living here and started to like the place. Then I moved in and I realised how good it was. I’m really comfortable in my container and I have a lot of space of my own. I wouldn’t want to live anywhere else in the world right now.”

The Wenckehof, completed back in 2006 and formerly known as Keetwonen, remains the largest development of its kind anywhere in the world. Although it was built as a temporary housing experiment, it proved so popular with students it was given permanent status by the Amsterdam authorities in 2011. And its success has intrigued architects and housing organisations looking for low-cost solutions to housing shortages in cities around the world.

Read more at The Guardian.